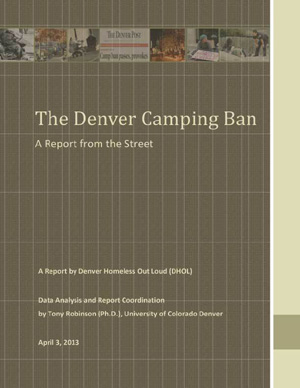 The Report:
The Denver Camping Ban: A Report from the Street  | PDF Format:

The “Urban Camping” Ban Survey will gather field data on how Denver’s recent “Urban Camping” Ban is affecting the lives of homeless individuals. The survey will be drafted and conducted by a coalition of homeless individuals, experienced researchers, and advocates who are deeply interested in the conditions of life for the homeless. The survey will be administered by trained volunteers, including people on the streets who identify as homeless or houseless.

Trained interviewers will survey members of Denver’s homeless community regarding such things as:

The completed surveys will be analyzed in a report produced by a University of Colorado Denver Political Science professor, who will work collaboratively with other members of the study team. This report will provide field-level data regarding how the urban camping ban is being implemented, how it is being experienced in the homeless community, how well the ban is achieving its aims, and possible problems or challenges associated with the implementation of the law. The results of this survey will provide valuable information as all parties go forward in understanding the effects of the law, and in informing future service-delivery plans or even possible legislative changes.