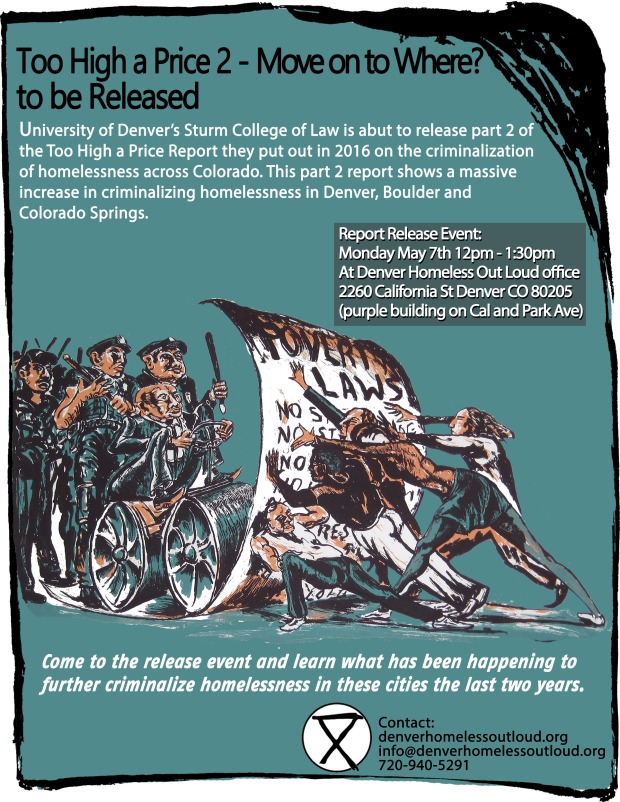 And on top of that you can get these things while the supplies last…!

Lunch will be served!

The University of Denver Sturm College of Law’s Homeless Advocacy Policy Project (HAPP) has published new research on how Colorado policymakers continue to criminalize homelessness in a new report titled Too High a Price 2: Move On to Where?

In 2016, the University of Denver Sturm College of Law published the groundbreaking report Too High A Price: What Criminalizing Homelessness Costs Colorado. Too High a Price 2 continues the work of that report, and provides a comprehensive look at how municipal ordinances across Colorado disproportionately affect the homeless population in Colorado Springs, Denver and Boulder.

“Despite the concerns expressed in Too High A Price, Colorado policymakers have continued to address ‘visible poverty’ in their cities by enacting and enforcing ‘quality of life’ ordinances,” says Nantiya Ruan, professor of the practice of law and faculty advisor for HAPP. “These ordinances typically prohibit life-sustaining behaviors that homeless individuals need to survive, such as sitting, sleeping, camping, and panhandling in public places.”

In the process of examining Colorado’s ever-increasing criminalization of homelessness, Denver Law students found that law enforcement frequently issues “move-on” orders in an effort to remove visible signs of poverty from its city streets. At first glance, these move-on orders may seem like a viable alternative to outright criminalization. However, with the extreme decline in affordable housing and the lack of emergency shelter space to accommodate Colorado’s growing homeless population, these move-on orders leave homeless people with nowhere to go.

The Denver Law student authors of Too High A Price 2 will present the report’s methodology and conclusions and answer questions at a press event on Monday, May 7, from noon-1:30 p.m. at 2260 California St., Denver, CO 80205.

Key findings of Too High A Price 2 include:

About the University of Denver: