Speak Up for Our Lives!! Tell City Council to End the Survival Ban

Survival camp of 20 people at 27th and Arapohoe – This camp has been kept extra clean and quite but was displaced nonetheless
We are desperate. The Mayor called for an extreme escalation of force starting Monday November 28th sweeping hundreds of homeless people “away” from places of rest all over the city. Since Monday police have been enforcing the camping ban with tickets and threats of arrest. When police give the ticket they seize people’s sleeping bans, blankets, tents, or other survival gear as evidence of the “crime” leaving these people with no protection from the elements with which to survive the winter night. Not only did the city sweep everyone, roughly 150 people, out of the Lawrence/Bway area, but further the city swept people out of the spot on 27th and Arapohoe where roughly 20 people have been surviving in a camp so clean the dirt is racked in straight lines. And even beyond this the city have been sweeping people out of places all over the whole city – any corner people find to try to hunker up with blankets to stay warm on these freezing winter nights. Even a single person and a sleeping bag is subject to enforcement of the camping ban and being moved along to no where.
Watch this video of police ticketing people for “urban camping” (surviving) and taking their gear as evidence of the crime.
https://vimeo.com/193964838
On Monday night after being swept from all over the city about 20 homeless people and about a dozen supporters “moved along” to city hall to sleep in front of the Mayor’s office. Since we have been swept from all over the city we had no where to go but to the Mayor himself to demand this craziness end and tell him, “Mayor Hancock, you cannot sweep away homelessness.” Police were called in to enforce the camping ban – ticketing homeless people in sleeping bags and telling them they had two choices “either leave right now and we will take your stuff as evidence, or come to jail and we will also take your stuff as evidence.” 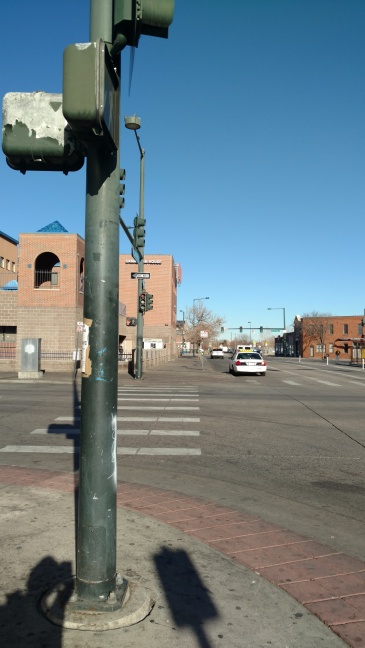 Two Police Cars Guarding the Sidewalk by Samaritan House on November 30th – Police have been stationed to guard the sidewalk and move anyone who tries to sit down since November 28
The Mayor is forcing death on people forced to survive outside in Denver winter. With this level of camping ban enforcement we are likely to have many more homeless people die this winter. We CANNOT stand back which this happens. We MUST stand together until our city decision makers changes this law and allow people to use a blankets to survive the winter.
Join us Monday December 5th at 4pm in front of the City and County Building to bring our signs and voices demanding the survival ban end. At 5pm we will be going in to the City Council general public comment period where homeless people will be sharing with the Council what is really going on and what needs to be done.
Contact your council person and tell them you support an end to the camping ban! https://www.denvergov.org/content/denvergov/en/denver-city-council/contact.html