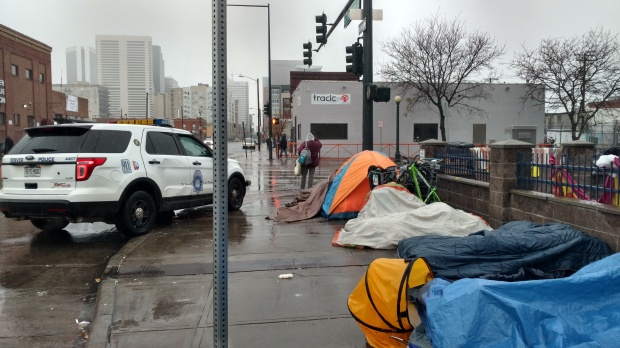 Since Tuesday 11/15 the city has continued to sweep people every morning staying outside the central homeless service hub on Lawrence and Broadway. And since Tuesday people surviving together on these blocks continue to come right back the minute the “clean up” is done. Police continue to wake people up, force them to move around, and enforce ever changing policies regarding how  many inches one can be from the side walk and so on – regardless of the freezing weather. And due to this freezing weather homeless people continue to use whatever protection from the elements they can to survive – regardless of the Mayor’s wishes.

This morning police came to wake everyone up and tell them they needed to move at 5am in the middle of the freezing rain. Police continued to drive around harassing people yelling threats and mean words until public works showed up at 9am to do their “clean up” (in spite of the fact homeless people had already swept the blocks with what brooms they have). At first police and public works said they were not going to make everyone do the whole move along dance they usually make folks due – moving all their stuff from one block to another and taking anything remaining. But than, after some people already had been told they were good to leave and go to work or due whatever eronds they need, public works changed their mind and starting taking anyone’s stuff that was not their to claim it – and not letting friends claim their friends stuff. Many people’s belongings were taken to “storage” – we will see if they can get it back… All of this in the snow and rain.

In the midst of all this Officer Lombardy warned us there will be a heavy police presence harassing people there at all hours of the day and night regardless of the weather. He went on to explained to us why these sweeps were happening saying, “This place is giving Denver a black eye. It is making the city look like it does not care about their citizens.” He has this right. The Mayor and his administration are demanding these sweeps hit homeless people hard and make them suffer so they will go “away” out of sight out of mind and not make the city look like it does not care for its people.

There are currently about 150 homeless people living in this area who could really use some support. If you can come out Monday – Friday mornings to help people please do! Some helpful things include…

-Helping move stuff who wish to do so,

-Video police to hold them accountable and document what is going on,

-When it is snowing/raining come by and take loads of blankets/sleeping bags to be dried,

-Bring coffee or any other such warm treat:)

-Help out in many many other ways…