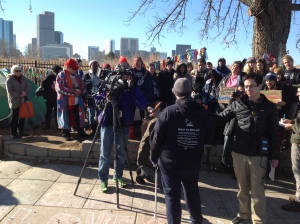 Denver CO — Today, Friday September 9th 2016, the motion for class certification for the class action lawsuit against the city of Denver for violating constitutional rights in the “Homeless Sweeps” has been filed by Attorney Jason Flores-Williams in the Federal District Court of Colorado. The motion states, “The City of Denver and the remaining Defendants have been seizing and summarily destroying the valuable and essential personal property of homeless people in Denver, according to their ongoing unlawful practice and policy. The unlawful conduct is not a matter of randomness or isolated cases of abusive law enforcement, but follows a common pattern and results in the same legal violations against all class members.”

We at Denver Homeless Out Loud have experienced, witnessed, and know of the sweeps effect on thousands of homeless people all over the city. We know it is common for police or city employees to take people’s property in these sweeps – leaving people with nothing. We know the harm these sweeps bring to communities trying to stick together to survive.

This class action lawsuit represents the cry of thousands of homeless people in Denver to respect our rights. We will not remain silent – we will not be hidden and swept “away…”

All documents filed in this class action lawsuit, including this motion for class certification, can be found on Denver Homeless Out Loud Site under https://denverhomelessoutloud.org/class-action-lawsuit/