City Sweeps “Away” at least 80 People Sleeping by River 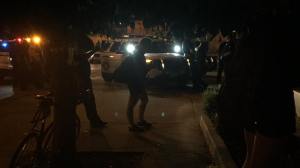 On July 13th 2016 throughout the night and early morning at least 80 people who are homeless were displaced from their resting place, treated as criminals, many ticketed for simply existing, some had property taken, and all moved along to nowhere. Police were sent out en mass to criminalize anyone caught resting by the river. Just above the river there were at least 50 people who had created a home and community with tents, tarps, cars and trailers as dwelling places since March when they were swept from the area by the triangle and the Mission. These 50 plus people were forced out of this area at 6:30am, many tents and other property taken, and everyone is yet again left to search for somewhere they will be let live.

On July 13th, after hearing there may be sweeps on the river that night, a number of Denver Homeless Out Loud members and others living on the streets went to the river to act as “cop watch” and hold police accountable. Some people who often sleep in the general area gathered to sleep on 15th and Little Raven, and a number of DHOL members stayed there awake to watch for police, while others biked the river watching out for other camps. At 1:30am about 25 cops rolled into the area by 15th and Little Raven, surrounded the 11 people sleeping and sitting there, and told them to sit on the ground and not to move, ran everyone’s name, and gave everyone tickets for park curfew and arrested two people for warrants. This area had no signs designating it as a park.

There were 36 people total ticketed for park curfew along the river that night. What was abnormal about this night was not that 36 plus people were sleeping by the river, but the large number of police patrolling and ticketing sleeping people. People sleep along the river every night and will continue to do so as sweeps in downtown areas continue to push people further away and as there continue to be no attainable homes. Since March police have been increasingly “moving along” people sleeping by the river (while at the same time telling people sleeping in downtown areas to go to the river to sleep). The sweep on July 13th was just a larger scale – hitting more people, with more tickets, and with more police.

This massive policing of people resting needs to stop! It is morally wrong to treat people as criminals for doing something that is not a crime – sleeping is not a crime no matter how you write the laws.

Watch video of this mass police ticketing for sleeping and sitting

At 6:30am cops swept the “Atkins Camp” just above the river displacing roughly 50-75 people, taking tents and other property, and throwing them in the trash. They also towed peoples’ vehicles if they could not drive it away. These people were not given written notice from the police that they had 72 hours or would be kicked out at this time. (The only notice people received that this might happen was the flyers DHOL passed out in the area.)

People had been living here since March when they were swept from the area by the triangle and the Mission. By staying together this community has been able to watch out for each other and find the means to get by. Displacing people who gather together to survive leaves these communities in danger, is not necessary, and is wrong.

The city tries to justify these sweep under “health and safety” concerns. If the issue is health and safety then put up a public bathroom with toilets and water in the area, bring in trash services, or allow people to use tents or other protection from the elements. If they were actually concerned about the health and safety of those staying here these would have been logical responses. But since they are not actually concerned about the health and safety of people staying here but rather justifying kicking “unwanted people” father out of sight and out of mind, there response was to threaten to arrest people, to take their meager homes, and tell them to leave. The city further tries to justify these sweeps by saying they help “connect people to services.” This is like saying giving someone a band aid will help heal their broken leg.

This sweep has left so many people displaced without their only basic survival gear. This sweep has yet again swept “away” people who were swept from the triangle in March. There is no “away” to be swept to… this insanity needs to stop. We must have the basic right to rest for survival! 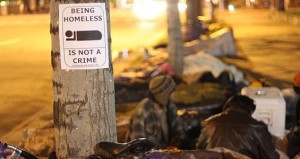 Most of us ticketed with park curfew by 15th and Little Raven are homeless and those that are not have no or little money. We are hoping to raise enough money to pay all 11 of the $85 tickets given to those staying at our site if needed. Some of these people will be fighting the ticket in court as they should not have been ticketed in the first place. However 3 of the people ticketed are traveling through Denver and need to get to important events in other states before their court date was set so we need to pay their tickets soon. Any money raised will be used to pay the park curfew tickets, replace stolen and trashed survival gear for those at the Atkins camp, and help people get their towed vehicles and possibly the bond payments for the arrested people. Any donations will be greatly appreciated!