Resurrection Village For The People!

Today we announce the opening of Resurrection Village, a tiny home village built by and for people without housing. Hundreds of people came out to Sustainability Park in the Curtis Park neighborhood of Denver to build a tiny home village where three urban farms are being displaced to build an apartment development, and where in 1999 hundreds of residents were evicted from low-income housing on the site.

Resurrection Village is a working model for alternative, democratic, self-determined housing.  Designed for functionality as well as beauty, our village aims to meet not only the needs of our bodies, but the longings of our souls. We are weary of trying to fit into a broken and dehumanizing system in order to find shelter and safety. Winter is coming, and we can’t wait any longer for the bureaucrats and politicians to take action. Today we are reclaiming our public lands and our right to survive in a place we can call home.

The urban farmers collaborative did not know or consent to our plans to build a tiny home village and stay on this land. We simply decided this land must be for affordable homes and for the people and that we cannot wait for permission.

We are in a housing crisis. Denver’s record high rents and lack of affordable housing–the Auditor’s office has estimated a shortfall of 26,000 units–have literally left us out in the cold. We have to exist somewhere. Because there are no suitable options for those of us who work low-wage jobs, are unable to work, or can’t find work, we have decided to create options for ourselves. Tiny homes are an inexpensive, ecologically conscious, tangible and dignified alternative to living outside or trying to hustle a spot in the overcrowded shelters. Tiny home villages–such as Dignity Village in Portland, Oregon–have been used across the country to provide a solution to homelessness that works. The first community of its kind, Dignity Village was founded in 2001 and provides housing for 60 formerly homeless residents. While it costs $20.92 a night in Portland to house an individual in an emergency shelter, Dignity Village can house the same person for only $4.28.

We are in a crisis of humanity. In Denver and all across the country, laws have been passed that make it illegal to conduct necessary acts of survival, including lying down and protecting oneself from the elements with anything other than one’s clothing. When you lose your housing in Denver and have to live in public space, you are no longer respected as a human being with basic rights. You are continually “moved along,” harassed, ticketed, incarcerated, and treated as less than human due to being homeless.

Recent statements by the Federal Department of Justice and the U.S. Department of Urban Development (HUD) call for an end to the criminalization of homelessness and put pressure on cities to end these laws. The Homeless Bill of Rights Campaign is growing in California, Oregon, and Colorado as we work together to pass the Right to Rest Act, giving us the right to be human. A tiny home village not only makes fiscal sense, it’s a more dignified alternative than treating someone like a criminal.

We are in a crisis of homelessness. Across the country, including in Los Angeles, Portland,  and Hawaii, city governments are declaring homelessness a “state of emergency.” Here in Denver homelessness is growing faster than anyone can count as housing prices rise to record levels, 4000 new people arrive in Denver each month, and the city puts millions more into jails than affordable housing. We need homes not jails.

No significant legislative change has ever occurred in American history that did not require the people directly affected to become organized and demand better treatment for themselves. For example, the New Deal housing and jobs programs were a direct result of powerful social movements, including Hooverville protests and the work of the ‘Bonus Army’–in which thousands of veterans and their families built a tent city on the National Mall in Washington D.C. and demanded access to governmental relief programs and decent housing. 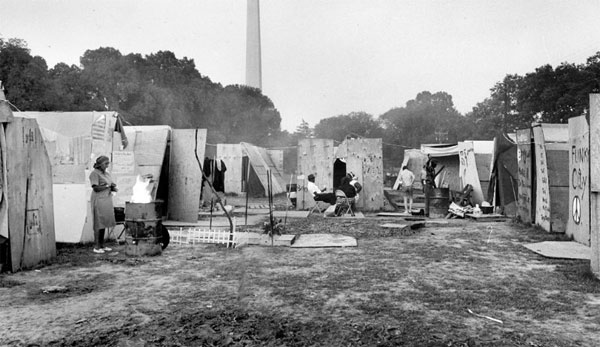 Thirty six years later, Martin Luther King’s Poor People’s Economic Human Rights Campaign sought to carry on the legacy of the Bonus Army, by building a tent city–called ‘Resurrection City’–on the Washington Mall, to demand better wages and access to decent housing. After King’s assassination, momentum waned for the Poor People’s Campaign, but still, in 1968 over three thousand people occupied the National  Mall until they were forced to leave six weeks later.

Our naming this village ‘Resurrection Village’ is meant to honor the many who have brought us this far, and to remind ourselves that this struggle will only be won if people experiencing poverty demand justice for themselves.

Sustainability Park is a property in downtown Denver owned by the Denver Housing Authority (DHA). In the 1950s, DHA constructed affordable housing on this land, providing homes for hundreds of residents. In 1999, after years of budget cuts, the housing projects were in need of maintenance and repair. Instead of investing in maintaining the projects, DHA evicted its residents and the place was levelled through a Federal HOPE VI program. (Hope VI, started to revitalize ‘severely distressed’ public housing into mixed income developments, resulted in the forced displacement of tens of thousands of families and the loss of large amounts of guaranteed low-income housing nationwide.)

In 2009, after years of lying unused, the land was turned into a ‘conceptual’ park named ‘Sustainability Park,’ within which experiments in sustainable building practices and an urban farm could be developed. The Denver Urban Farmers Collaborative accepted DHA’s invitation to build their farm and programs there. During this time, DHA published reports and communications regarding their plans to develop affordable housing on the land in the future.

However, in 2015, DHA revealed its plan to sell Sustainability Park, as well as the adjoining city block (two blocks total) to Treehouse Development and Westfield Co., to develop into for-sale non-affordable housing.  According to current real estate reports, smaller units will be available from the upper 200ks, and larger homes for 600-700k. Both DHA and Treehouse argue that the future development will be made up of eco-friendly housing, with vague promises of  retaining aspects of growing food.

DHA claims that this contract will create revenue for future affordable housing developments. The developers also say they have met their quota of affordable housing because, as required by the Inclusionary Housing Ordinance, the development will make 10% of units “affordable,” which in this case means that there will be 22 units for individuals making between $22,400 and $44,800 a year and able to buy a home. Not even these token 22 units would be affordable for the hundreds of low income people who were kicked out of their homes on this land 10 and 20 years ago. Meanwhile, DHA has rejected our proposals to create a tiny home pilot project anywhere on the public land that they steward.

No amount of ‘greenwashing’ and empty promises can hide the plain truth: Public assets should not be used to  incentivize upscale market-rate housing. Urban farmers and low-income people should not be displaced for the sake of economic development right in the midst of Denver’s worst housing crisis ever.

So, with a lack of other options, we are taking public land back for the public.