COPS CAN’T TICKET YOU FOR PANHANDLING! 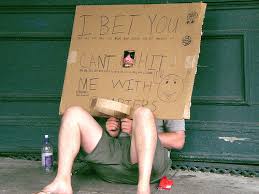 This means cops SHOULD NOT ticket you for sitting or standing on public space asking for money, or flying a sign to do so, EVEN IF IT’S:

# Near an ATM machine

# Near a bus or shuttle stop

# Near the entrance to a building

# Near an outdoor patio where food or drinks are served

BUT–You CAN still be ticketed if, in the course of panhandling, you:

* Touch or cause physical contact with someone against their will

* Use violent or threatening gestures or abusive language toward someone

* Along with others, act in an intimidating way as you approach or follow someone

* Remain on private property after being asked to stop or leave

* Are on or near a street or highway

City Council will be reviewing the current (suspended) panhandling ordinance and may make changes to eliminate the UNCONSTITUTIONAL parts. We will keep you updated!

Meanwhile…if you DO get harassed or ticketed or told to stop panhandling, in violation of Chief White’s order–LET US KNOW by stopping in at our office at 2260 California St (the purple Centro Humanitario building), or by contacting us at: