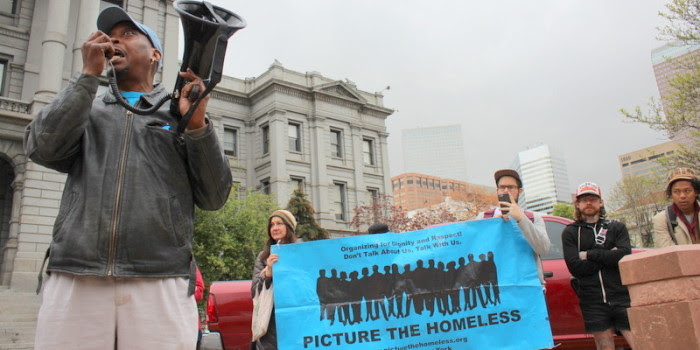 Rally Before April 27th R2R Hearing — representatives from 17 states and 38 organizations fighting criminalization of homelessness in their states rallied in support of the Colorado R2R!

Because this bill did not pass the people of Colorado will continue to be awakened in sleep and moved about the city with no place to legally rest; the people of Colorado will continue to be ticketed and later thrown in jail for covering up with a blanket to stay warm; the people of Colorado will continue to hear taps on their window from officers telling them they can’t sleep in their own car. And the list goes on of all the dehumanizing, destructive, costly, and ineffective forces that will continue to be used to criminalize existing in public space.
With that said it should be clear why the State, Veteran, and Military Affairs committee vote against the Right to Rest is not the end of anything. This is only the beginning. We are continuing this fight for our rights to survive as long as they continue to squash those rights. We will be building the movement and coming back next year even stronger…! This year we had this bill in Colorado, California, and Oregon – next year it may be in even more states! We press on until we can all rest…
Watch Testimonies posted by Get Loud Magazine here
https://www.youtube.com/watch?v=W7-MCCdF80Q&index=13&list=PL-THNi2BjExnH18KW90_wny7r-7ufRVKj