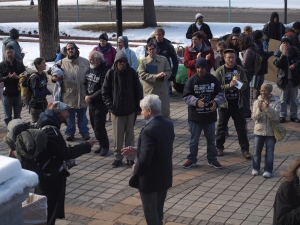 A wondrous event occurred on the steps of the Denver Capitol on February 2nd. Denver Homeless Out Loud (DHOL), a volunteer organization working to amplify the voices of homeless people, organized an event to kick off a campaign for the Colorado State Legislature to pass a Right to Rest Act to protect all people’s rights to use public spaces. The event attracted several hundred homeless people who came all the way from Fort Collins, Boulder and surrounding Denver suburbs–as well as from Denver itself.

This festival was together with Western Regional Advocacy Project one of 8 actions in cities in California and Oregon in support of the Right to Rest!

The event included music, speeches, plays, break dancing, banner and button making, postcard-writing, and food. It involved conversation, mingling of supporters who dropped in and out, and many important interactions. Over 25 people took the microphone to describe how their lives have been impacted by the criminalization of homelessness and why legislation is needed to end this harmful trend. 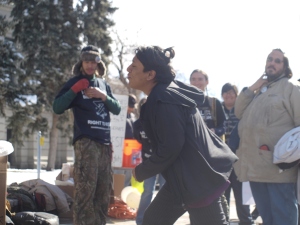 “I think everybody should have the right to sleep even if they are homeless,” said Angie, a formerly homeless young adult who volunteers with the Prax(us) organization. “I’m tired of being treated like an animal just because I may look homeless or be homeless. It gets tiring going from place to place just to find some place to sleep. I support the Right to Rest Act.”

“We need to work together, the homeless and the housed,” said Charles, a homeless artist.

“This issue should be near and dear to all of our hearts,” said Rep Salazar. “We are all our brothers’ and sisters’ keepers, and there’s not a single person that we should leave behind. This is my moral and spiritual conviction…. I’m looking to charge forward really hard on this bill, and I hope you’re standing right alongside of me.” 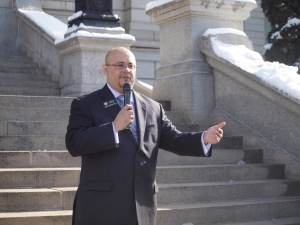 The gathering was passionate, peaceful, accurate, thoughtful–and joined together all who attended with a spirit of hope, solidarity and community. In short, it was an unique event in Denver — one which should give momentum to the legislature’s consideration and passage of a Right to Rest Act for the state of Colorado.

Watch video of the event here

And video of the event by the DAM Collective here http://www.damcollective.tv/